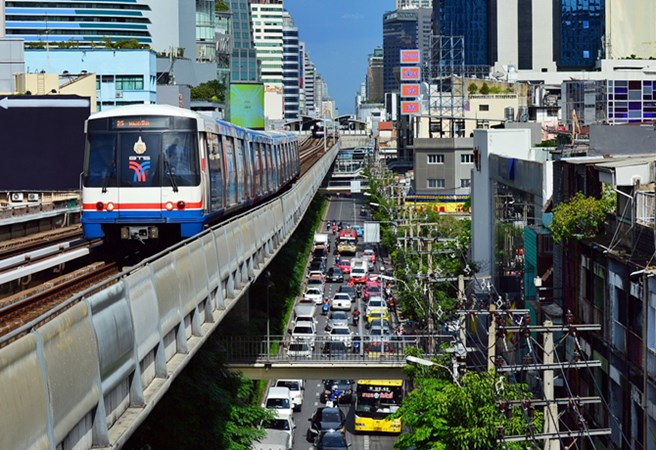 Although the planned Bangkok BTS Gold Line has taken quite a bit longer to complete as was initially forecast, the Bangkok Metropolitan Administration (BMA) has announced it is expected to now open in December.

Extensive testing of the signaling and operational systems on the entire 1.72 kilometre BTS line is currently being carried out and, once complete, the line will be ready to accept passengers.

This first phase of the BTS Gold Line will run from Krung Thonburi BTS station to the Klong San station. Once open, it will consist of access to three stations — Krung Thonburi, Charoen Nakhon (Iconsiam) and Khlong San.

Unlike other BTS lines, the Gold Line will be operated using Bombardier Innovia APM 300 trains made in China. These trains are designed to produce even less noise than current BTS lines.

A second phase of the Bangkok BTS Gold Line is also currently in the works, with an additional almost 1 kilometre of track being installed that will eventually run from Khlong San station to Pradjahipok Road in Thonburi district.

This is expected to open some time in 2023, with a goal of eventually connecting to the future MRT Purple Line.

Interestingly, the Gold Line is not being funded by the BMA, as it was not a part of the original BTS/MRT plan for Bangkok.

Instead, it has been fully funded by the company that proposed the additional line — Siam Piwat — the company that owns the Iconsiam complex. A complex that will have a Gold Line station directly next to it once the line opens in December.

In return for paying all the construction costs, Siam Piwat will receive all advertising and operating profits for the first 30 years of the BTS Gold Line’s operation.

A smart investment by Siam Piwat, and one that is an enormous benefit for the people of Bangkok without their taxes having to pay for it.

Keep up-to-date on future developments on Bangkok’s BTS system on the official website.