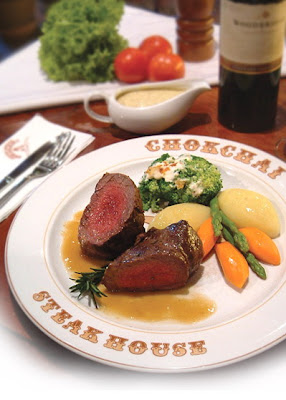 Many expats in Thailand know much of what’s served as ‘steak’ in Bangkok  isn’t very good. Thai steak if often tough and stringy and not particularly flavorful so, finding a great steak in Bangkok can be a chore. Never fear though, there are excellent steak restaurants in Bangkok serving both amazing Thai and imported steak and the following are some of the best.

Chokchai Steakhouse – Among Thais, Chokchai Steakhouse is known as the best and most popular steak restaurant in Thailand. Opened in 1971, Chokchai serves their own ranch-raised steak from Chokchai Ranch in Ratchasima province. They specialize in three different grades of steak – regular beef steak, dry aging steak (which goes through a 15 day dry aging process) and premium steak ( a 30 day dry aged steak). Chokchai steak is a world-class steak that’s moist and full of flavor. Prices are inexpensive too.

At Chokchai Steakhouse, you can order t-bone, prime rib, filet mignon, prime rib and other cuts, as well as pork, chicken, sausages, grilled salmon and New Zealand lamb chops. They also sell perfect steak burgers. There are three branches of Chokchai Steakhouse in Bangkok – one at Sukhumvit Soi 23, another at Future Park mall in Rangsit and the third at 294 Moo 8 Viphavadee Rangsit Road.

New York Steakhouse – The New York Steakhouse in Bangkok is in the JW Marriott Hotel at 4 Sukhumvit Road, Soi 2. Another of the best steak restaurants in Bangkok, this one is pricey, but well worth the money. New York Steakhouse serves imported Australian beef, that has been chilled and not frozen. They come in all the usual cuts and are cooked to perfection to your specific request. The restaurant also serves some amazing seafood, including lobster and shrimp. They have an excellent wine list and, of course, don’t forget the decadent desserts. Plan on spending well over $100 for dinner for two.

Neil’s Tavern – The oldest, and some would say the best, steak restaurant in Bangkok, Neil’s Tavern is a favorite with expats who love not only the food but also the atmosphere. Neil’s Tavern opened in 1969, and is named after Neil Armstrong. The restaurant serves Kobe steak from Japan, USDA steak from the US and rack of lamb and beef short ribs from Australia. Everything here is superb, from the steak, seafood and lamb to the soups, salads and side dishes. For dessert, don’t miss one of their homemade pies or cakes, or buy something at their incredible on-site bake shop to take home. Neil’s Tavern is located on Soi Ruam Rudee just off Wireless Road.

Eating steak at any of these three best steak restaurants in Bangkok will be one of the best meals you have in Bangkok. With a choice of Thai, Japanese, US or New Zealand steak there’s a steak for every taste and every price range.