With the September 26th visa amnesty deadline in Thailand less than three weeks away, many Americans are still in Thailand and some are stuck.

Repatriation flights are expensive and not easy to get, few commercial flights are leaving Thailand, and some Americans have other problems that negate them from leaving the country.

At least before the September 26th deadline.

With that in mind, some are trying to find out the answer to this question — “Can Americans in Thailand get a visa extension letter from the U.S. Embassy allowing them to stay after the September 26th deadline?”

Applying for a visa extension letter from the U.S. Embassy & Consulate in Thailand

The grace period put into place by the Royal Thai Government for people stuck in Thailand on temporary visas is due to expire on September 26th.

At that point, anyone still in the country without a relevant current visa or without permission by Thai Immigration will be subject to fines and deportation when caught.

Many Americans still stuck in Thailand are hoping to get a visa extension letter issued by the U.S. Embassy & Consulate for Thailand.

Up until very recently, this was not possible for most people.

The U.S. Embassy has changed their mind, however, and, if you fulfill the criteria they require, you may now be issued a visa extension letter.

It does, however, mean there is more likelihood it will. 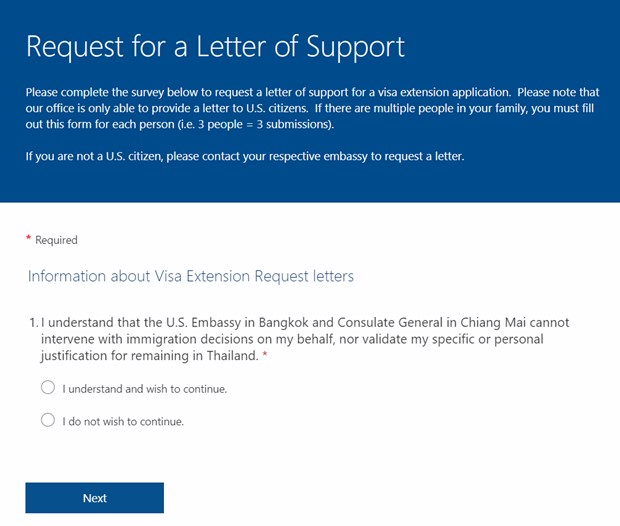 The Request for a Letter of Support from the American Embassy in Thailand can be completed here. (See first page above).

Be aware, however, you must fulfill the requirements they have set out and, if your reason for not being able to leave Thailand is purely financial, the U.S. Embassy has measures in place to help.

This is generally in the form of a repatriation loan (which you can apply for here) but, be warned, it must be paid back as, if it is not, when your American passport comes up for renewal, it will not be renewed.

The U.S. Embassy will not loan you money so you can stay in Thailand beyond the visa amnesty deadline, however, so once a repatriation loan is made you will be expected to leave.

Meanwhile, the Thai Immigration Bureau is urging foreigners to renew their visas before the September 26th visa amnesty deadline.

That does seem to indicate no other extensions will be forthcoming. Although, this is Thailand, so that could change.