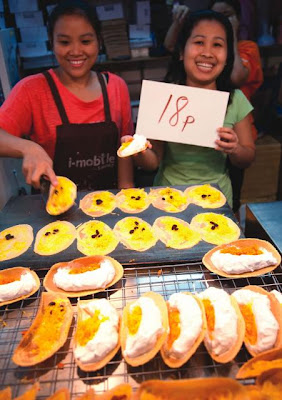 Update, Bangkok, 2018 — Even though this was written in 2011, the prices I quote are not that much different now. Just in case you’re planning your budget!

What is the cost of living in Thailand compared to the USA?

Take into consideration that the average salary for an English teacher in Thailand is between $885 and $1,560 per month (using an exchange rate of 31 baht to the US dollar).

Apartments – Apartments in Thailand are cheap, particularly compared to apartments in America, so on this alone your cost of living in Thailand will be less. For around $130 a month in Bangkok, you can get a nice one room studio with attached bathroom and sometimes also a small kitchen area.

This would be in a building mainly lived in by Thais, but the buildings are generally exceptionally clean and safe. Outside Bangkok, you can rent a similar room for around $100 a month.

If you want a one-bedroom apartment, your costs will increase to approximately $210 to $285 a month, but these will be in nicer buildings. They will also often have a swimming pool, a laundry, and a small convenience store and some will even have a gym.

I live in a serviced apartment (it comes with twice weekly maid service and cable TV) and for this I pay $340 a month. A far cry from the $1,550 I was paying in Los Angeles for an apartment with no maid and no cable TV. My rent, by the way, has not increased in 15 years.

Eating Out in Thailand – Food is cheap in Thailand. Eating out at a Thai restaurant can be as cheap as $1.50 per meal and, even at a more expensive restaurant, it’s rare that dinner per person would be more than $4 to $10 (tip included).

I eat out at least one meal a day as it’s often cheaper to do that than to buy groceries and cook.

Groceries at the Supermarket in Thailand – The cost of living in Thailand is cheaper when it comes to groceries, if you stick to mostly Thai food products, as groceries in Thailand are much cheaper than in the US. If however you buy a lot of imported western food, you’ll find your grocery costs sky-rocketing as they are not usually cheap.

I spend $50 a week at the supermarket and for that I get all my cleaning and laundry supplies, entrees for 15-20 meals a week, yoghurts, bread, cheese, milk, fruit, fish, vegetables and a lot of vegetables for the rabbits I own.

The $50 also includes a few ‘treats’ like chocolate, containers of fruit juice, Thai desserts, breakfast pastries, and even sometimes some new plates, plastic containers for the kitchen or a couple of CDs or DVDs.

Groceries at the Market – There are thousands of markets all over Thailand selling food. If you buy fruit, vegetables, fish, chicken, and household cleaning supplies here, you can save even more money. Fruit is around 30 cents a bag (pineapple, mango, papaya, dragon fruit, oranges, water melon etc), vegetables 30 cents per bunch, and most are fresh off the farm that day or the day before.

Utilities – In most apartment buildings and rented houses, utilities are cheap. You should be able to air condition and light a one bedroom apartment for less than $35 a month, and a 3 bedroom house for less than $95.

It’s hot here too, so you need the air conditioning on most of the time. Public Transportation – Public transportation in Thailand is cheap. Taxis will run you between $1.25 and $2.00 per average trip. Buses are between 30 cents to 75 cents per trip depending on if you take an air-conditioned bus and how far you’re going.

The sky train is between 60 cents and $1.50 per trip for most trips and the underground is 50 cents to $1.30 (unless you get a bulk trip card, in which case it’s cheaper). You can also take tuk-tuks and motorbike taxis (motorbikes are between 30 cents to $1.40 per trip and move quickly through Bangkok’s traffic jammed streets).

I spend no more than $100 a month on public transportation and I take taxis and the sky train everywhere. In the US, with car payments, insurance, gas and maintenance, my car cost me at least $700 a month, and I had the hassle of finding a parking space too.

Entertainment – The cost of living in Thailand compared to the USA is cheap when it comes to entertainment. Going to the movies (which are beautiful, clean and first-class quality here) is as cheap as $4.00 and that’s for a reserved seat.

Going to a bowling alley for a family of four will cost around $25 to $35 for an evening, which includes dinner and a couple of beers for the parents and soft drinks for the kids. Buying CDs and DVDs is cheap. Going golfing is one quarter the price of the US and a night out at a local bar or pub with dinner will be $10 to $20 per person depending on how much you drink or eat.

Flying to Phuket from Bangkok on Air Asia is currently $87 round-trip and around the same to Chiang Mai. You can even fly to Malaysia for less than $170 round-trip and to Singapore and Hong Kong for not much more.

Salaries are about 40 to 50% of salaries in the US for similar jobs but even with this reduction in salary, things still cost less. The income tax rate is also much lower (I currently pay 10% on my base salary).

So, if you’re thinking of coming to Thailand to visit or to live, don’t hesitate. The cost of living in Thailand is much cheaper than in the US meaning, financially, you should definitely do better.

Photo copyright www.tourismthailand.co.uk (Thanks Tourism Thailand :)) – is from a campaign done by Tourism Thailand UK showing how cheap things are – the photo shows the seller saying dessert in Thailand is only 18p (equivalent of around 25 US cents).