While Thailand is one of the safest places in the world for tourists, it has its fair share of tourist scams. Some of the places where tourists end up victims of one of these scams, usually designed to part you from your hard-earned cash, are the Thai islands of Phuket, Koh Samui and Koh Samet. That’s because they’re popular with tourists, particularly young travelers, and, once the beach beckons or the alcohol starts to flow, it can be incredibly easy for unscrupulous types to get exactly what they want. Your money.

Thai island scams aren’t just perpetrated by Thais either. The Russian mafia has a large presence on various Thai islands and, according to Thai authorities, is responsible for a large number of crimes against tourists. These crimes include extortion, counterfeiting, petty theft, crimes involving prostitution, and pandering or begging.

In the many times I’ve visited Phuket and Koh Samet, I’ve been approached by Russians with strange stories or who were trying to sell me things I didn’t want. As a resident of Thailand, I usually know what sounds legitimate and what doesn’t but a tourist often will not.

With a wide variety of scams on-going on Thai islands, what should you do to avoid being embroiled in one?

Follow these tips, and you should hopefully avoid most of them.

Renting a moped? Lock it and watch it – One of the biggest scams on Phuket and Koh Samui is connected to moped rentals as some bike shops rent mopeds out, follow the person who rented it to where he parks it and then steal it. This culminates in requests for huge amounts of money to pay for the full cost of the moped, or for requests that you claim on an insurance policy if you took one out. Both, of course, are patently illegal and can end up costing you a lot of money.

If you rent a moped on Phuket, Koh Samui or Koh Samet, always lock it no matter where you park it and check on it periodically. A renter who is obviously monitoring the bike isn’t an easy target, and the moped shop will usually move on to someone else.

The jet ski scam – One of the most famous scams on the Thai islands is the jet ski scam. Not only has it made international newspapers, teams of journalists have even staked out some island beaches and filmed the scammers in action. Thai authorities have promised to stop it but the Thai jet ski scam still happens on Thai islands every day.

This is how it works. You rent a jet ski and take it out for a spin. When you come back, you are approached by the renter plus several other men who say you have damaged the jet ski and demand several hundred dollars for a ‘repair’. If you refuse to pay, you will then be threatened and, in some cases, things dan get violent.

The ‘damage’, of course, was there already before you even took the jet ski out. Some Thai policemen are also in on the scam, so you can’t always expect any help there.

To avoid the jet ski scam on a Thai island, either take photographs of the jet ski from every angle before you rent it, rent one from your hotel or, better yet, don’t rent a jet ski in Thailand at all.

For more information on how the scam works, watch this documentary video that was put together by ‘Thailand Undercover’, and you’ll see how easy it is to get caught in it. 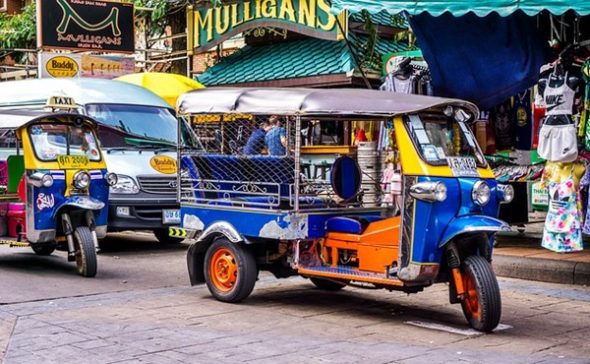 Avoid taking tuk-tuks – While taking a tuk-tuk in Bangkok or Chiang Mai is expensive enough as Thai tuk-tuk drivers are notorious scammers. the tuk-tuks on Thai islands take the cake. With little public transportation, tuk-tuk drivers have a corner on the market and they will scam any tourist they can for outrageous fares.

Your best bit is to avoid taking tuk-tuks, particularly on the Thai islands, and take a metered taxi, a songtaew (open-sided pick up truck that acts as a communal taxi) or walk.

If it’s too good to be true, it always is – While things are cheap in Thailand, if someone approaches you and offers you a tour, a visit to a ‘gem factory’ (a notorious scam), free tickets to a concert or event, a scratch-off lottery ticket (which you always ‘win’ and then have to attend a timeshare presentation), or if children come up to you offering to play a betting game with you, walk quickly away.

Even in Thailand, if it’s too good to be true, it always is and you are about to be scammed.