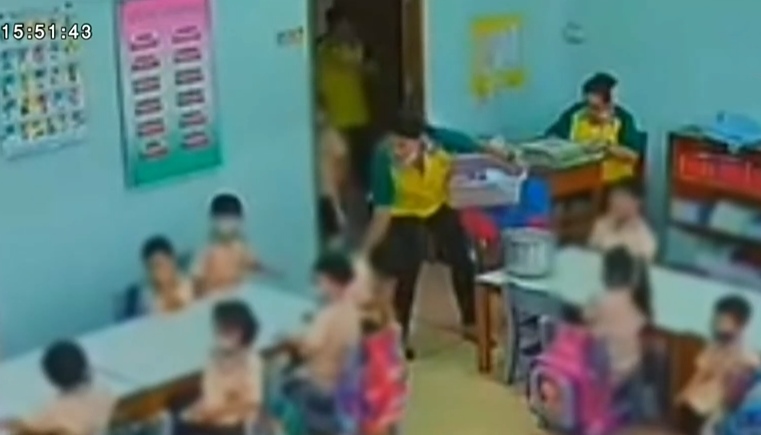 Things are not getting any better for Sarasas Witaed Ratchaphruek School, and for the other Sarasas schools in the privately owned bilingual schools chain.

This after a news report from The Nation today states parents of 10 more kindergarteners have filed charges against teachers at Sarasas Witaed Ratchapruek School after seeing them also being abused on CCTV.

The parents and Ronnarong Kaewphet, lawyer and chairman of the Justice-seeking Advocacy Network, filed charges at the Pakkred Police Station late this week.

Ronnarong also made a statement saying the charges had been filed after parents saw their children being abused by two teachers. One child had a garbage bag put over his head, while others were beaten.

Parents had apparently complained to the school previously after finding wounds on their children’s bodies. They were told the injuries occurred due to their children playing a little too roughly.

In the past few days, Sarasas Witaed Ratchapruek School has come to national attention after one teacher, Ornuma “Jum” Plodprong, was caught on camera physically abusing the kindergarteners in her care.

Since the revelation, 31 charges of assault have been filed against her so far. Three other teachers at the school also had assault charges filed against them.

On Thursday, Khaosod reported police had been informed about violence against students at another Sarasas school.

In that case, parents at Sarasas Witaed Romklao School said their children had been choked and beaten by teachers, and another parent said his child had been beaten with an aluminum ruler causing 14-15 injuries on his body.

Due to the abuses, authorities now intend to investigate all 49 schools in the chain. They will reportedly be checking teaching licenses and work permits for all teachers, as well as investigating if any other abuses against children in the schools’ care have taken place.