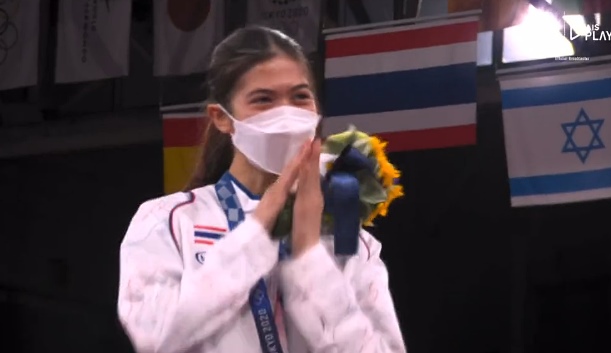 The 23-year-old Panipak beat Spanish teenager Adriana Cerezo Iglesias in the taekwondo 49kg category, although it was a nail-biting finish with the Thai woman down 9-10  with less than 10 seconds to go in the match.

In her final two shots, however, she gained two points, giving her an 11-10 win over Iglesias.

Panipak’s win is the first ever medal for the Taekwondon Association of Thailand, but she is no stranger to medals herself.

The Thai was also a bronze medalist at the 2016 Olympic Games in Rio de Janeiro, Brazil, and has also won gold at the 2015 World Championships, and at the 2017 and 2018 Asian Games.

The Thai sportswoman, whose nickname is Tennis, was also riding high on Twitter soon after her win, where the hashtag #NongTennis was trending.

Good news Thailand sorely needs as it continues to fight a new wave of Covid-19 infections.

Meanwhile, here is Panipak beating the Israeli fighter Avishag Samberg yesterday, in a match that ended in just two rounds with a score of 29-5.