Education in Thailand is in serious trouble

Plagued by inadequate funding, huge class sizes (more than 55 students to a class is normal), terrible teacher training, students that seem to have little motivation and a system that forces teachers to pass students even though they have actually failed – there doesn’t seem to be much hope education in Thailand will improve any time soon.

I taught in a private bi-lingual school, so had far less problems than exist in government schools. Even here though the school falls under the Thai Ministry of Education’s bureaucracy, which is one of the most ridiculously inept in the world.

Rules change every semester, new guidelines are handed down to teachers regarding course content, lesson plans, testing etc at the beginning of each new semester, then change again the following one.

Teachers are told to pass students, even though they have failed, and a blind eye is turned to serious problems like plagiarizing.

Every year the Ministry of Education brings into effect another new idea for improving education in Thailand — none of which, of course, ever work or, if it might, they don’t give it long enough to reach fruition.

The year after, they try something else.

One year’s bright idea was to force every Western teacher teaching in Thailand to take a Thai Culture course. Regardless that many teachers have been in Thailand for years and are well-versed in Thai culture, in order to get a teacher’s license or renew the one they already have they were forced to take it anyway.

A Thai Culture course, I might add, that was held on the weekend and that required all teachers to learn Thai dance complete with traditional costume, to be taught ‘Thai values’ with comments from the instructor like ‘dark skinned Thais work in the fields and light skinned Thais work in offices’, and to take a beginning Thai language course when many of them already spoke Thai fluently.

As the course cost between $125 and $300, money that had to be paid by the teacher, many teachers said they would not do it.

I knew two excellent and highly-qualified teachers who left Thailand to go to Korea and Japan to teach instead, and I stopped teaching in Thai schools completely when this new requirement went into effect.

After all, if the Ministry of Education seriously thought the only reason Thai education is so poor is because the western teachers didn’t understand Thai culture, then they had more problems than even I knew.

In most other countries in South East Asia, western teachers are paid more, it is easier to get work permits with less hoops to jump through, and the Ministry of Education in these countries is much more forward-thinking.

Thailand already has problems getting and keeping good, qualified western teachers that care about their students. Implementing this new law simply meant even more of these teachers went elsewhere instead. In most countries, government organizations are known to not be particularly effective. The Ministry of Education in Thailand though is one of the most ineffective organizations I have ever dealt with.

Case in point — when I was teaching at my last school, I was approached for help in English grammar one day by the Thai computer teacher who was upset because he had just been chastised by a representative from the Ministry of Education.

The Ministry representative had noticed some work he had been doing with his students and had told him very rudely that he should make sure the English wording on the kids’ Mother’s Day greeting cards was correct. (It already was!)

This coming from a representative of an organization that routinely sends forms in English to western teachers that don’t have even one grammatically correct English sentence on them.

Some of these forms were so compeletely unintelligible my Thai boss would just throw them in the nearest garbage can. 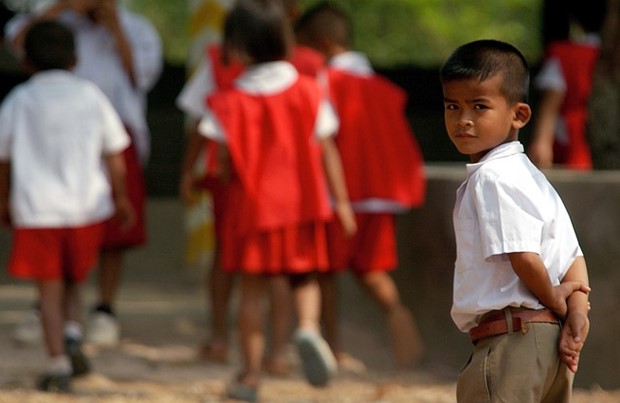 A crisis in education in Thailand

Thailand is now facing a crisis in education, and it is easy to see why.

Thai students are not taught to think for themselves, so have few critical thinking skills. At government schools, more than 55 students in a class is the norm. Some of the kids just sleep through class, as the teacher often doesn’t notice if they are listening or not.

Books are limited, science equipment doesn’t exist in a lot of schools, and western teachers in government schools are often unqualified and have no interest in teaching their students anything.

Related: Why Asia is the best continent when teaching English

But as many Thai schools cannot afford to pay more than $750-$800 a month for a western teacher, they get what they pay for. (Many of these ‘teachers’ are men without college degrees who simply came to Thailand because of the Thai women, then ended up teaching as it is one of the few jobs Westerners are allowed to do).

In order to try to solve the problem of unqualified Western teachers, Thailand started to clamp down on tourist visas. These unqualified teachers cannot get work permits for a teaching job in Thailand so they live here on tourist visas, leaving the country and renewing them every 3 months.

Until the Thai government changed the law about tourist visas, of course.

Now it is almost impossible to do live and work in Thailand on a tourist visa.

However, the only thing this new tourist visa restriction did was to penalize the true tourist to Thailand. The guys who are getting them illegally just chose to stay in Thailand illegally, so nothing really changed.

Meanwhile, education in countries such as Vietnam, Malaysia, Korea and China is improving in leaps and bounds, while Thailand is set to fall to the bottom of the pile of southeastern Asian countries both educationally and economically.

The Thai government and the Education Ministry, however, waste their time on ridiculous new rules, instead of a more common sense way of dealing with things, and continue to cause the country to fall further and further behind. Firstly, if the government simply mandated that a college degree and a TEFL certificate were the basic qualifications to teach in Thailand, this would rid them of most of the Westernerns here who are not remotely qualified to teach. Education in Thailand, at least when it comes to teaching English, would almost instantly improve.

Secondly, if they increased teacher salaries for both Thais and Westerners, they would get better qualified teachers. As it stands right now, Thai schools pay the exact same low wages they did when I came here 18 years ago. Yet most prices in the last 18 years have gone up more than 40%.

Thirdly, if the government made getting a work permit easy for qualified individuals, instead of the mess it is now, teachers would come here and would stay.

But at the moment, you can get a visa, work permit and a better paying job in Korea, China, Singapore, Hong Kong, Malaysia and Japan. So why come to Thailand?

Education in Thailand, however, is not likely to change any time soon.

Thai society is all about saving face and appearance is everything. Representatives of the Thai Ministry of Education never listen when they are given advice by teachers, both Thai and Western. Teachers who know better than them what Thai education needs. After all, they are in that system teaching those kids every day.

And as long as the way a kid looks is more important than what the kid knows, Thailand’s education system is a lost cause. Thailand will continue to fall further behind in the education game and the better Western teachers will continue to leave.

But hey, who cares, at least the kids look cute when they are all parading around in their Scouts uniforms.

Just a pity less than 10% can actually speak more than 20 words of English correctly, and a lot of them are not particularly competent in Thai either.