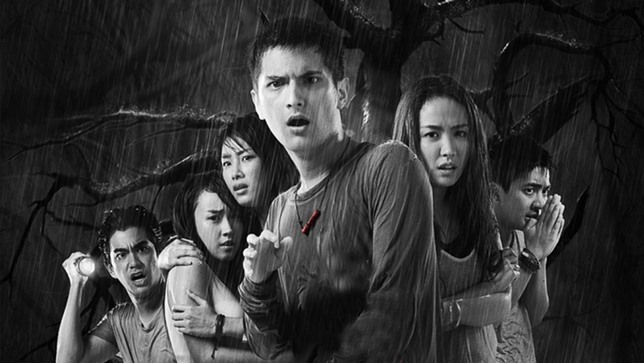 Thongsook 13 (aka Long Weekend) is a new Thai horror movie created by some of the delightfully warped minds responsible for one of my favorite Thai movies ‘SARS Wars‘.

In Thongsook 13, a group of teenage friends head to an isolated island but decide not to take a boy called Thongsook with them. He is a little odd, not very popular, tends to have epileptic-style fits and they don’t want him included in the group.

Needless to say, Thongsook ends up on the island anyway, which would have been fine and dandy if he didn’t turn out to be a conduit for the ghosts that haunt it.

Throw in a certain night of the year when the ghosts are at their strongest, which of course would be the night the teens are there, and we suddenly start wishing the group was bigger as they begin getting killed off one by one.

Now, Thongsook 13 is like many Thai horror movies. Thai ghosts are scarier than western ghosts, they really are, and Thai movies about ghosts tend to be frenetic, violent and really quite bloody.

Thongsook 13 fits into the genre nicely, thank you very much. But it’s such a glorious gore-fest, I had a fabulous time watching it.

If you have not seen Thongsook 13 yet and like scary Thai horror movies, I highly recommend this one.

Just be warned, the last half of the film you will hardly be able to sit still in your seat as scares come thick and fast, and don’t count on sleeping that night with the lights off either.

Thongsook 13 is still showing at most Bangkok theaters, Just be sure to pay for a ticket at the theater at whichever movie cineplex you go to that is showing Thongsook 13 with English subtitles — if you don’t understand Thai very well, that is.

Meanwhile, watch the official Thongsook 13 video trailer below, and then tell me that is not crazy scary.

By the way, if you love Thai movies, you really should check out these, what I think are the top five best Thai movies made in recent years.

One of them, ‘Shutter‘, is one of the scariest Thai horror movies I have ever seen, as it scared the beejeezus out of me.