Things at Thai Airways could hardly be more dire.

With the airline industry worldwide in almost-collapse due to COVID-19, Thai Airways (THAI) has experienced the same problems almost every other airline has seen since early March, 2020.

Planes grounded, enormous amounts of money owed to customers for flights that were canceled due to the virus and, in the case of Thai Airways, creditors in several countries threatening to come after the company’s overseas assets.

The problems Thai Airways has though are much more severe than many other airlines, a number of whom came into 2020 having earned record profits and with cash reserves in the bank.

For Thai Airways, however, the opposite was true.

That is a short fall of approximately 94 billion baht (approximately $3 billion) between what the company owns and what it owes.

Thirty-one of Thai Airways’ aircraft are also on financing leases, with another 39 on operating leases.

European aerospace company Airbus is one of the companies that has been attempting to obtain rental payments for 30 airplanes it has leased to the troubled airline.

As the Thai government is still refusing to allow their borders to open to international travelers, like other airlines in Thailand, Thai Airways has been unable to resume flights and, thus, is unable to make income to help keep the company afloat.

With the airline stating it is unable to cut its monthly operating costs by 6 billion baht, it will also not have enough money to pay all of its June bills.

In other words, it is almost impossible to think of a situation that could be worse for Thailand’s former national flag carrier.

With the Asia-Pacific region’s airlines also expected to lose more money than any other region in the world due to COVID, there is little that looks pretty for THAI in any of this. 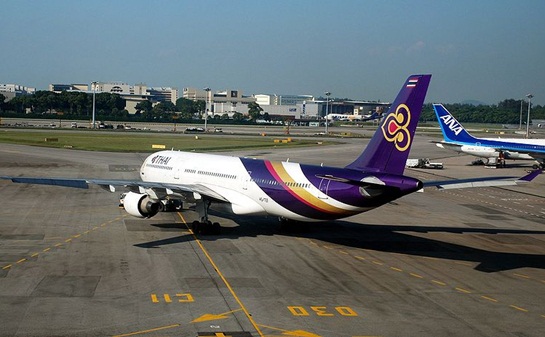 One piece of good news in an avalanche of bad news for Thai Airways is its success in being able to negotiate with some of its creditors earlier this month.

Those creditors are in Switzerland, Japan and Germany.

The airline also plans to file for bankruptcy protection in the United States. A country beleaguered with its own airline problems.

Since Thai Airways was forced to shut down flights at the end of March due to COVID-19 restrictions put into place by the Thai government and by governments of countries THAI flies to, the airline also owes tens of millions of baht to its passengers whose flights were canceled.

In response to requests from customers about flight cancellations and when refunds would be made, Thai posted the following letter to their Facebook page: 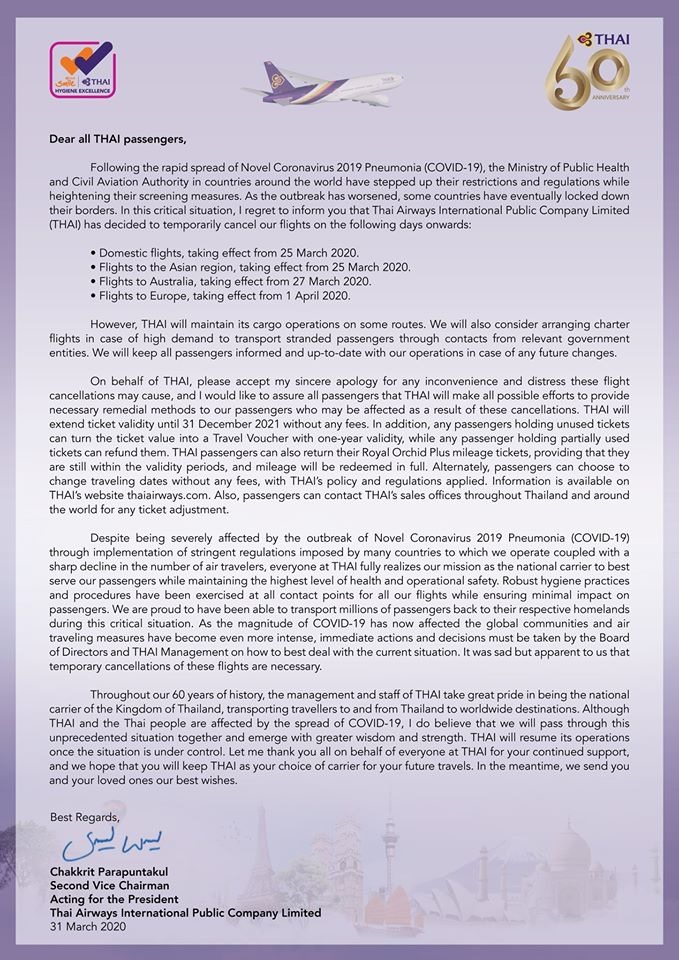 In other words, yes, customers can turn their unused tickets on Thai Airways into vouchers to be used for future travel through the end of 2021 without any fees. If the airline was to collapse and close, however, those vouchers would be nul and void leaving customers with money owed to them they will never likely receive.

As for refunding money for canceled flights, at this time the company says they cannot.

With the Thai government initially offering the airline a loan and then withdrawing that offer and mandating the airline go into bankruptcy and debt restructuring instead, Thai Airways is now due to appear in bankruptcy court on August 17th.

Earlier in the week, acting Thai Airways president Chakkrit Parapuntakul said there were no plans to lay off any staff for at least the next year.

This is due to his belief it will take at least a year for the final restructuring plan to be finalized and approved, and layoffs are not planned during that process.

With plans to cut routes and downsize the fleet, however, it is difficult to see how the company can manage that. With over 2,1000 people employed by the airline, estimates are at least a third of them could be laid off if layoffs do indeed begin.

Meanwhile, almost all Thai Airways staff is furloughed on partial pay for the near future as planes remain grounded at Thailand’s airports.

Just as troubling is Thai’s announcement earlier in the week they are not currently planning on running any flights until at least August 1st.

That means another almost seven weeks with little income coming into THAI at a time when the airline is bleeding money.

Even when flights do begin, demand is expected to be low from both domestic and international travelers with normal levels before COVID-19 not expected to return for at least the next two years.

That means there is little chance of THAI increasing its usual income in order to help pay off some of its creditors or to allow it to get into a financial position that is more stable than currently.

According to a report in the Bangkok Post, even when flights do resume, it is also a plan to not resume flights to Italy, Moscow, Vienna, Oslo, Stockholm, Sapporo, Fukuoka, Sendai, Kathmandu and Colombo.

Whether in the short-term or long-term, however, is not yet known.

As if many Thais are not angry enough at the mismanagement of Thai Airways, their former national carrier, they woke up to even more news this morning that made them take to social media demanding change.

That news was the shock story Thai Airways senior executives are being given up to 75,000 baht (approx. $2,415) per month each as a ‘travel allowance’.

Considering these executives are working for an airline that is hovering on permanent collapse, and many of them already earn around 700,000 baht ($22,525), even Thai politicians are outraged at this newest sign of mismanagement.

Democrat Party deputy leader Samart Ratchapolsitte was one of those complaining as he commented about the travel allowance,

“Thai Airways argues those at the top must have chauffeur driven limousines,” Samart wrote on his Facebook page.

Samart then commented some of the airline’s executives do not have chauffeur services to pay for, but are still asking for the full allowance even though it is not needed as they are driving their own vehicles. 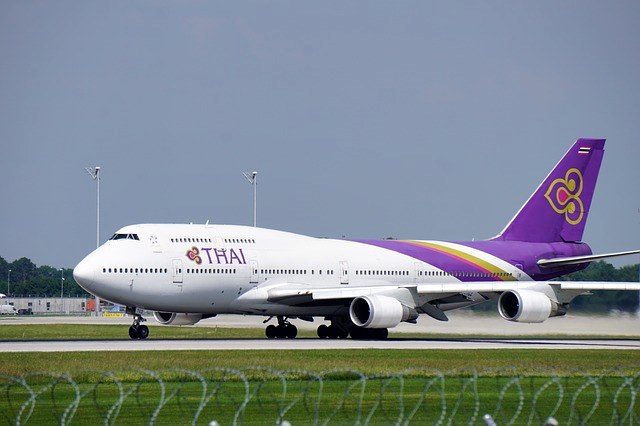 Will Thai Airways survive or collapse after COVID and debt restructuring?

Late last year when THAI’s financial problems were beginning to resurface, a writer at Forbes predicted even if they were under huge financial pressure, Thai Airways would likely survive.

The author of the article, James Asquith, came to that conclusion due to the airline’s political connections and it being owned by the government.

That prediction was before the COVID panic hit THAI, before the Thai government decided to withdraw its offer of a 50 billion baht loan guarantee last month, and before the country’s Finance Ministry sold off a 3.17% stake in the airline to the Vayupak 1 Fund.

On top of that, with mismanagement and potential corruption at the airline now being investigated as part of its bankruptcy case, some of the political connections THAI had in the past are likely to disappear as others scramble to distance themselves from it.

Whether Thai Airways will ultimately survive or collapse after COVID and its debt restructuring therefore is, honestly, anyone’s guess.

However, while it is difficult to find little that is positive in any of this, and with various reasons to presume Thai Airways will ultimately close, I still would be a little wary of giving up on THAI just yet.

After all, the airline has been Thailand’s national carrier for over 60 years, is intrinsically connected to the country’s world-class tourism industry and, for much of its existence, has been the pride and joy of Thailand.

A loss of such an airline would be an enormous loss of face for both the Thai government and its people.

On top of that, the government’s sale of its 3.17% stake in the airline was a deliberate move. As was explained at the time of the sale, while the airline remained a government-owned entity, it made it more difficult for them to save it due to legal restrictions.

Once not a state-owned operation, however, the Thai government may just have more opportunities to be able to put a workable plan into place.

In my mind then, I do not think we are seeing the last days of THAI yet but, instead, may just be witnessing an ultimate pathway to its resurrection.

Time, of course, will tell.