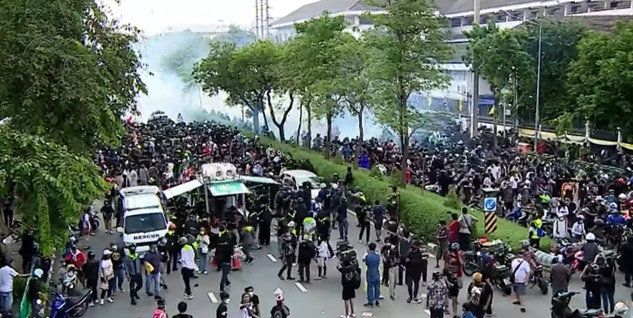 As public support for the Thai government of Prayut Chan-o-cha continues to collapse all over Thailand, police fired water cannons, rubber bullets and tear gas at protesters in Bangkok today.

The protesters were demanding the resignation of Prayut Chan-o-cha and his government, and that they be held accountable for their gross mismanagement of the Covid-19 pandemic.

Several protesters were injured by Thai police and taken to health sites set up by volunteers near Democracy Monument.

Journalists covering the protest were also caught up in the violence as police fired rubber bullets and tear gas in their direction.

The Sunday protest in Bangkok was led by the Free Youth movement and its supporters. A movement that has only grown in number the longer the current government has remained in power.

Mock body bags were carried during the protests, calling out the government’s failure to stop Covid-19 infections from spreading, and to point out lockdowns are not only not solving the problem but that they are causing suicides nationwide due to economic catastrophe.

Protesters also demanded the procurement of mRNA vaccines, so the country can recover from Covid-19 and people can go back to their normal lives.

Thousands of people along the Bangkok protest route honked their horns in agreement with the protesters, or applauded as they walked and drove by.

The government’s response? To announce even stricter lockdown measures will be put in place in the next few days.

Lockdown measures that have not stopped the spread of Covid-19 in the past, but have caused Thailand’s economy to weaken even further.