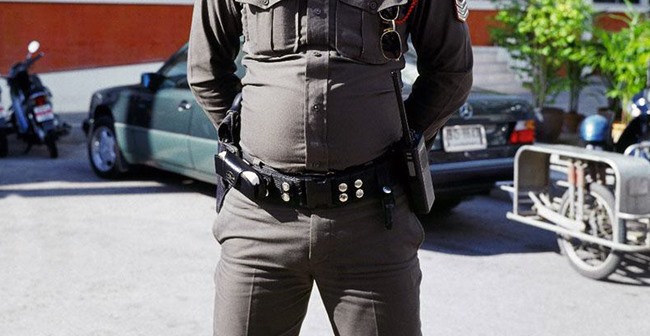 Reading through this Reddit thread today reminded us many foreigners visiting Thailand are not aware Thai police may stop you, ask for your passport, search you and, depending on what they find, fine you.

In rare cases, you may even be hauled off to a Thai police station.

In certain areas of Bangkok, being involved in this type of incident with Thai police has become so common place in recent years, many foreigners in Thailand complain about it online.

That is why, if you are in Bangkok, Thailand now, or plan on traveling to the southeast Asian country once the COVID panic is over, here are a few things you may want to keep in mind about Thai police and any interactions with them.

Which areas of Bangkok do Thai police usually stop foreigners in?

In most cases, this only happens in tourist areas of the city. Both foreign residents of Thailand and tourists are targeted, however, as police have no way of knowing if you live in Thailand or not are until they stop you.

The most notorious area for foreigners being stopped by police in Bangkok is the Thonglor area of the city, and has been for many years.

Many foreigners are stopped in Thonglor, their belongings searched and, if anything dodgy found, often asked for a ‘fine’. The fine, of course, is often nothing more than a bribe the police officer could pocket himself.

The area that is complained about the most often runs from Thonglor BTS to Asok BTS, as that is where officers from the police station in that district patrol.

Other areas of Bangkok foreigners have been stopped include just about all of the main shopping areas of Sukhumvit Road, and at some of the city’s tourist attractions.

The Grand Palace, known as a place where some of the worst scams in Thailand are carried out, is also a place where police patrol.

The Khao San Road area is notorious as well, as police are looking for foreigners carrying drugs. With young backpackers the largest group of foreigners frequenting that area in normal times, drugs are often more in vogue with them than they are with older tourists, and so they can be an easy mark.

(* A quick aside here — never carry or do drugs in Thailand. Ever. The country has some of the strictest drug laws in the world, with hundreds of foreigners currently serving time in Thai jails due to the drugs police found on them).

Of course, you could be stopped by police anywhere in Bangkok, especially now the country is in lockdown and foreigners are far fewer.

It is more likely to happen in tourist areas of the city, however, with few reports of people being stopped outside those areas even now.

Why do police stop foreigners in Bangkok?

Just like anywhere in the world, Thai police are often looking for drugs when they stop a non-Thai and ask him to turn out his pockets and then go through his bag.

Drugs they can then either haul you off to jail for if it is a large amount, or smaller amounts of recreational drugs they can get you to pay fines for so you avoid jail time.

Thai police are notoriously underpaid, with most not able to afford to live on the monthly salary they earn.

No, these salaries are not enough to live on for most people. Not when you consider most Thai police have to buy their own office supplies and their own guns. Yes, their own guns!

That is why, towards the end of the month when money is running low, you will see police setting up road blocks around Bangkok in an attempt to make money from motorists who may be flouting the law.

Both Thais and foreigners are targeted in this instance.

The lack of a livable income is also why some police officers stop foreigners in Bangkok. Incidences of this nature tend to escalate as the month draws to a close and money is low.

After all, a small amount of marijuana or other recreational drug found on a foreigner could net them several thousand baht in fines.

Is it immoral for a Thai police officer to demand fines he may pocket himself?

If you are in Thailand, it is something you have to accept.

Until, at least, Thai police are paid the higher salaries most of them deserve.

Another reason Thai police are likely to stop foreigners in Bangkok in September, 2020 and beyond is due to the current visa amnesty ending on Saturday, September 26th.

At that point, any foreigner in Thailand who does not have a relevant visa allowing him or her to legally remain in the country could be a target of police.

The Thai government is serious about the end of the visa amnesty and has warned all foreigners in Thailand not in possession of a valid visa, they must leave the country on or before September 26th or they must get a visa extension if they are eligible

After September 26th, it is almost certain Thai police will be stepping up the number of foreigners they stop in Bangkok and elsewhere, and they will be checking passports and visa stamps to make sure they are legally in the country.

Thai authorities have already warned anyone found without a relevant visa or visa extension will be arrested, fined and deported. If they are caught after 90 days of overstay, they will be placed on a blacklist and banned from returning to Thailand for one year.

Any longer overstay than that, and the ban is even longer.

If you are blacklisted in Thailand, can you go back? If so, how?

In normal times, foreigners do not usually need to carry their passports as, if stopped by police, a photocopy is usually sufficient.

After the visa amnesty ends on September 26th, however, it is recommended every foreigner carry their passport as Thai police will want to check visa validity.

How to behave if you are stopped by Thai police?

If you are not doing anything illegal and you are legally able to be in Thailand, there are a few things you can do to ensure your interaction with police is easy, fast and problem-free.

If you have done something wrong and it is a small infraction, be prepared to pay an on-the-spot fine. Do not complain about it as that fine could suddenly become larger, or you could be taken to the local police station for a more thorough search and questioning.

You can find more information about your rights when dealing with police in Thailand in this excellent Khaosod article written by a Thai and an American attorney.

In every situation, treat Thai police with respect and you will likely soon be able to go on your way. Create trouble and do not be surprised if things go badly for you.

Remember, you are in a foreign country and you must abide by Thai law. One of those laws is that Thai police are allowed to randomly stop and search people if they believe it could prevent a crime.