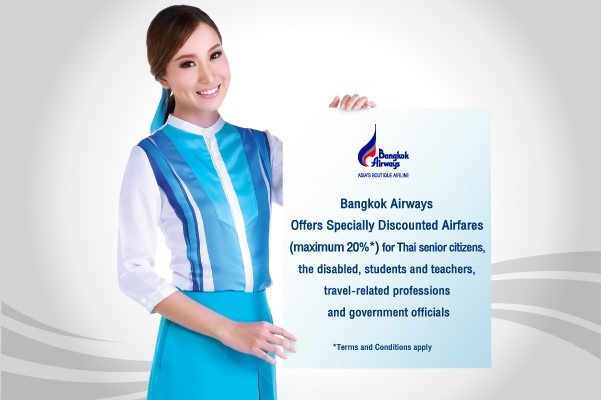 Anyone who has spent any time in Thailand knows there is a two-tier price system prevalent all over the country.

A system that allows Thais to pay what is sometimes a fraction of the cost foreign residents and visitors in Thailand pay for the same service.

This two-tier price system occurs at Thailand’s national parks, museums, zoos and other tourist attractions all over Thailand.

While foreign tourists often do not even know they are being charged much higher prices, due to the price sneakily being written in Thai and not Roman numerals, foreign residents usually do.

When these foreign residents pay taxes on income made in Thailand, and bring money into the country from overseas as well, Thailand’s two-tier price system angers many of them.

Sadly, it seems, Bangkok Airways has also decided to implement Thailand’s two-tier price system this week when it comes to offering Thai senior citizens (age 60 and above) up to a 20% discount on flights booked from October 1st until the end of December, 2020.

A 20% discount on Bangkok Airways flights that is not available to the tens of thousands of foreign retirees currently living or working in Thailand, but only to Thais it seems.

One wonders then what rational there could possibly be to such an exclusionary decision being implemented by a Thai airline?

After all, when Thailand’s tourism industry is collapsing, millions more Thais are likely to be unemployed by the end of the year, and most Thai airlines, including Bangkok Airways, are struggling to survive, why would a company cut out a sizable number of people who have the money necessary to take flights?

People who probably would book flights to various destinations in Thailand over the next few months, if they were given the same discount their Thai counterparts are offered.

Then again, this is Thailand. (Article cont. below…)

In other words, for those foreign retirees living in Thailand, if you are looking for a discounted flight specifically for senior citizens in the next few months, Bangkok Airways is probably not the airline that will give it to you.