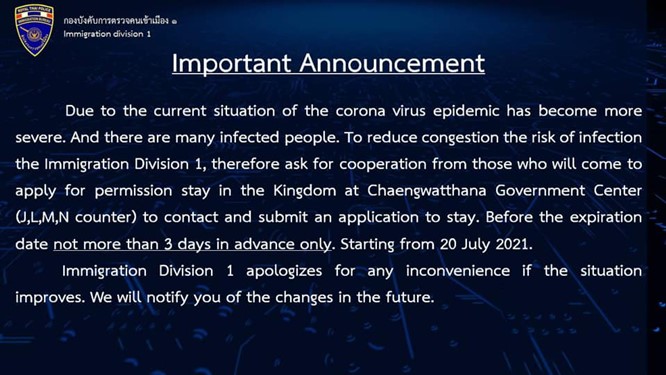 While the latest announcement from the Bangkok Immigration Division about visa extensions makes little sense in a time of rising Covid-19 cases in Thailand, what is stated is the current official line.

The announcement, which was posted on the Bangkok Immigration Facebook page today, tells foreigners living in or visiting Thailand they can currently apply for visa extensions at Bangkok Immigration up to 3 days before the visa expires. But not before.

In their minds, this apparently helps with “congestion” at Immigration Division 1 — the Immigration offices at the Chaengwatthana Government Center.

Officials at the Immigration Office, however, do not seem to understand the same number of people that needed visa extensions before the announcement will still show up but, instead of them showing up sometime during the week before their visa expires, now they will show up during the last three days.

That means more people at Chaengwatthana in a shorter period of time, and not less. Thus, causing the congestion Immigration fears, and with the resultant new Covid-19 cases in Bangkok the government is trying to avoid.

As several people on social media commented upon learning of the new Bangkok Immigration rule about visa extensions, why are people even required to extend visas during a time when Bangkok is almost completely locked down, and everyone is being asked to stay at home?

Surely it would make more sense to announce an extra one month’s permission to stay has been added to any visa expiring between now and August 3rd, the supposed end of the lockdown, so that more Covid-19 infections can be avoided in both the foreigners and the Thai Immigration officials serving them?

Or set up a system so visas can easily be extended online.