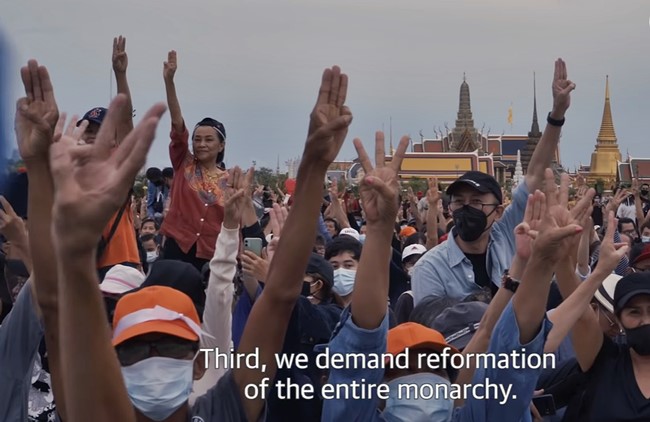 One thing governments like the Thai government of Prayut Chan-o-cha never seem to learn is the descent into dictatorship never ends well.

This morning, however, the government announced a ban on gatherings of more than 5 people in a new State of Emergency imposed in Bangkok after over 10,000 people protested yesterday asking for the removal of Prayut’s government.

A ban was also announced on, what they call, the “publication of news, other media, and electronic information that contains messages that could create fear or intentionally distort information, creating misunderstanding that will affect national security or peace and order.”

In announcements reminiscent of world dictators, that last often means anything published or posted on social media that is negative towards the government.

Soon after the ban on gatherings was announced at 4am this morning, riot police descended on protesters at Government House.

Thai Lawyers for Human Rights said at least three of the protest leaders were arrested — Parit Chirawat (see The Guardian interview with him below), human rights lawyer Arnon Nampha and Panupong Jadnok — although police have yet to comment. (Article continued below video…)

The ban on large gatherings and news occurred under the country’s current emergency decree. A decree that has been in existence since Prayut’s government shut down the country’s borders in late March due to panic about Covid-19.

Borders that have remained closed since, destroying Thailand’s tourism industry, severely damaging the country’s economy and causing millions of Thais to become unemployed.

At this point, however, it seems Prayut and his junta government may not be able to stop the escalating pro-democracy protests as protesters are growing in number and confidence.

Not unless the government resorts to the usual way Thailand’s anti-democracy governments often end them — with shootings and the mass murder of unarmed citizens.

That scenario should not be ruled out, however, as Prayut is increasingly looking like a desperate man, trying to hold onto power in a country with a collapsing economy, locked down to the world, and with a young populace who do not seem to be afraid of him or his threats.

As an illustration of that, pro-democracy activists are already ignoring the State of Emergency and have announced a new protest at Bangkok’s Rathchaprasong intersection at 4pm today.

Meanwhile, former leader of the disbanded Future Forward Party, Thanathorn Juangroonruangkit, has stated the State of Emergency is not necessary and all those arrested last night should immediately be released.

He stressed the government needs to act now “before the situation worsens to a breaking point.”

That breaking point, however, may be coming sooner rather than later as the stand-off between tens of thousands of protesters and a Thai government descending into dictatorship continues.