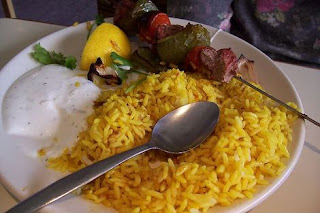 The first thing that overwhelms you when you arrive at Beirut Restaurant is the menu. It’s massive. Then, when you smell the aroma of hot pita bread you just want to order everything on the menu – and fast. Don’t miss the shawarma chicken (the spices are perfect), which comes with french fries and the shich taouk with rice is tasty too. You can even get burgers and fish and chips, if you want something more western, although why would you when faced with all this incredible Middle Eastern food?

Beirut Restaurant also does a thriving takeaway business and they will deliver in the immediate area. So, if you’re feeling like grabbing a bag of food and heading back to your apartment or hotel room for a relaxing evening, you have to get it from Beirut. Their prices are cheap too. No wonder it’s known as the best Lebanese restaurant in Bangkok.

Al Ferdoss – Located on Sukhumvit Soi 3/1, close to Beirut Restaurant, Al Ferdoss is on a street known by the locals as ‘Arab Street’ or ‘Soi Arab’. Which means it’s also just about the best street in Bangkok to get authentic and inexpensive Middle Eastern food.

Al Ferdoss makes the usual Middle Eastern fare of naan, tabouleh, hummus, lamb, kebabs and kofta and makes it well. Before you order anything else, you must order naan to snack on. It comes straight out of the oven and eaten with a small side dish of yoghurt with mint, it’s amazing.

At Al Ferdoss, the barbecued lamb is succulent and moist, the falafel has the perfect texture and mezze is incredible. Don’t miss ordering a beer at Al Ferdoss either. It comes in huge coffee-mug-like containers and really adds to the exotic mood.

Al Ferdoss is one of the best and cheapest Middle Eastern restaurants in Bangkok. Prices begin as low as 75 baht ($2.40) and go up to just a few dollars more. A couple can eat a huge meal at Al Ferdoss with appetizers and several entrees plus a couple of drinks for less than 500 baht ($16).

Shahrazad – The interesting thing about Shahrazad is, not only that its Middle Eastern food is excellent, but that it also serves Malaysian and Indian food, one of the only restaurants in Bangkok to do so.

Shahrazad, on Soi Arab like Al Ferdoss, is one of the oldest Middle Eastern restaurants in Bangkok and still one of the best. You know the food is good here too as it’s a popular place for Arab businessmen and tourists, who all seem to flock here every night for the pungent food and nice atmosphere.

The restaurant is not only known for its great food, but also for its waitresses, who wear the hijab (Muslim traditional dress) and for its friendly service. You must try the stuffed pigeon, one of Shahrazad’s signature dishes, or the lamb kebabs which are simply perfect. The naan is wonderful, but they also serve other types of Middle Eastern bread, along with a bowl of pickled vegetables to snack on while you wait.

I love Shahrazad as it’s always busy, and the atmosphere is so different than typical Thai restaurants. Plus, it’s right in the Middle Eastern area of Bangkok so, after eating, you can wander around or sit at a coffee shop and enjoy a Turkish coffee while watching the crowds walk by.