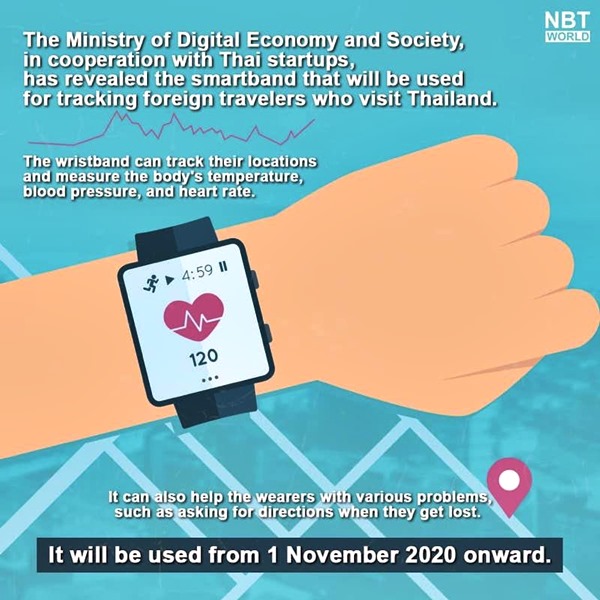 As if there were not already 100 reasons why tourists are likely to avoid Thailand for the next few years — a dictatorial government, growing anti-government protests, ridiculous requirements to enter closed-off Thailand as tourists, 14-day quarantine in expensive hotels, and expensive Covid-19 insurance, just to name a few — a new ‘smartband’ tracking wristband is likely to become mandatory for any tourist visiting Thailand.

At least, according to the Ministry of Digital Economy and Society, who this week announced the wristband will be mandatory for every foreign visitor to Thailand.

Thailand’s mandatory tracking wristband is supposed to track every foreign visitor’s location at all times, measure their body temperature, blood pressure and heart rate and, strangely, “help wearers with various problems, such as asking for directions when they get lost”.

That last, of course, likely thrown in to make would-be tourists more comfortable at being forced to wear a tracking device in Thailand during their entire visit.

As most comments on the government’s own PR Facebook page state, however, it is highly unlikely most tourists or other foreign visitors would ever consider visiting Thailand while forced to wear a tracking device.

This journalist, for instance, definitely would not as my privacy is far more important to me than a visit to Thailand. Most other people are likely to feel the same. (article continues below…)

Thailand wants you if you’re from a ‘low risk country’ and will jump through 1,000 expensive hoops

Of course, as has happened to the majority of Thai authorities’ announcements on how they plan on allowing foreign tourists and business people into Thailand since their Covid-19 panic began back in March, this idea will likely be discarded by next month as well.

Particularly as the country’s economy continues to collapse, anti-government protests grow and millions more Thais become unemployed due to the country’s borders having now been closed to foreign tourists for almost nine months.

Destined to go down in history as just another failed idea from the current Thai government and its co-horts.